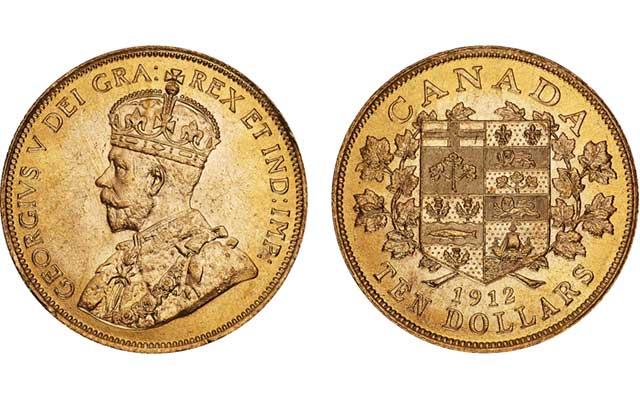 Canada’s gold coins have a spotty history indeed. The longest any type lasted in circulation was just eight years, tied between the intermittently minted $2 Newfoundland Gold Coin and Gold Sovereign.

Although predated by the $2 Newfoundland piece (1865–1888) and Sovereign (1908–1919), the Bank of Canada $5 and $10 Gold Coin was arguably the first truly Canadian gold coin. It was unique rather than a near clone of a British design, and it was intended for use throughout the country unlike the localized Newfoundland coin.

Ottawa removed the coins from circulation in an attempt to prevent gold from moving overseas during the First World War. Mirroring the actions of the United Kingdom, Canada abandoned the gold standard until being reinstated in July 1926. The standard was then dropped again in 1929.

After reclaiming the $5 and $10 Gold Coins, 246,000 sat in cloth bags inside the Bank of Canada vault for roughly one hundred years.

In 2015 the conservative government decided to liquidate quite literally by melting 216,000 coins. The best 30,000 specimens that remained were sold to collectors for either $1,000 or $1,750 depending if it was a premium coin or not.