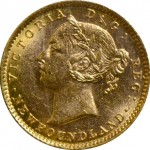 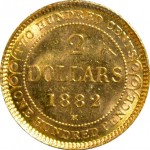 Newfoundland $2 gold pieces feature a bust of Queen Victoria. The coin was minted intermittently from 1865 to 1888 by the Royal Mint of England. 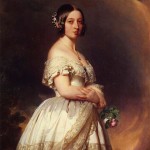 Before Canada became a confederation in 1867, most of the gold coins that were used were actually manufactured in Great Britain, Portugal, France and Spain. The first gold coins to be minted in Canada were produced in Newfoundland and were a series of two-dollar gold pieces. The only reason that such coins were minted in denominations of just two-dollars was the belief that since gold was too small, it would easily get lost. The imprinting of such gold coins used dies that were developed in London and included a portrait of Victoria, the word ‘NEWFOUNDLAND’ and the abbreviation D. G. REG., which meant ‘By the grace of God, Queen.’ The reverse of the die contained the date of manufacture along with the value of the coin inscribed in one of three ways viz. ‘2 DOLLARS’, ‘ONE HUNDRED PENCE’ and ‘TWO HUNDRED CENTS.’

Since Newfoundland did not have a mint of its own, these gold coins were all minted in England. These two-dollar pieces were produced in 1865, 1870, 1872, 1880, 1881, 1885 and 1888 by the Royal Mint of England and in 1982 by a private minting firm owned by Ralph Heaton and Sons in Birmingham. These 1882 coins bear a small ‘H’ below the date to denote this aspect. During the first and second world wars and just before Newfoundland’s entry into the Confederation, the Mint in Ottawa used to strike the gold coins for Newfoundland. On account of many reasons, these gold Newfoundland coins are considered to be quite rare even today.