Canada has a colourful heritage in its gold coinage. On one hand the Royal Canadian Mint makes one of the most coveted gold bullion coins in modern times, and on the other Canada has a track record of circulating gold coins for very brief periods before times of radical change such as the start of WWI or the end of the gold standard.

Originally this was intended to be a top 10 list. However, the Royal Canadian Mint has consistently been issuing collectable gold coins with low mintages and hefty price tags, and only time will tell which of these more recent designs will earn a place in history. Gold coins with the potential for future greatness are listed at the very bottom under honorable mentions.

These may not be rare like many of the other coins on this list, but the Canadian Gold Maple Leaf earns its place here for exactly that reason: it’s popularity and importance in the international gold bullion market. According to the ‘AMPEX Top 40’ products, only the Gold American Eagle and Gold Buffalo sold better, shooting ahead of even the staple South African Krugerrand.

The other claim to fame is these are the purest mainstream gold bullion coins available with a purity of .9999 since the revision in 1982.

An important landmark for the Royal Canadian Mint, this was the world’s first 99.999% 10-kg pure gold coin. Unlike the million dollar coin made in the same year, it was intended for public release. No more than 15 were produced.

The coin was given the second highest denomination ever by the mint at $100,000. Considering the value of the gold alone it’s currently worth almost $550k CAD!

Gold sovereigns have a long history in the UK; the first were minted in 1489 during the reign of Henry VII. Over 400 years later, Canada was the first country outside Britain to issue gold sovereigns starting in 1908.

The period of minting during the rule of George V, only produced 628,152 Canadian gold sovereigns in total, making all dates rare and in some cases exceptionally scarce. There are fewer than 50 1916 C gold sovereigns still in existence, which makes it one of the rarest and thus valuable Canadian coins.

Historians have noted these briefly minted $5 and $10 gold coins were discontinued and yanked from circulation to stop gold from leaving Canada during World War I. Additionally this is the time Ottawa suspended the gold standard.

In 2013, The Globe and Mail reported that the conservatives had plans to melt down more than over 200,000 coins still owned by the government, and 30,000 would be sold to collectors.

Minted intermittently during the reign of Queen Victoria, it was the only gold coin in circulation issued by a British colony. Newfoundland was self-governed so the choice to issue the coinage of their choice was done independent of the influence of the UK. 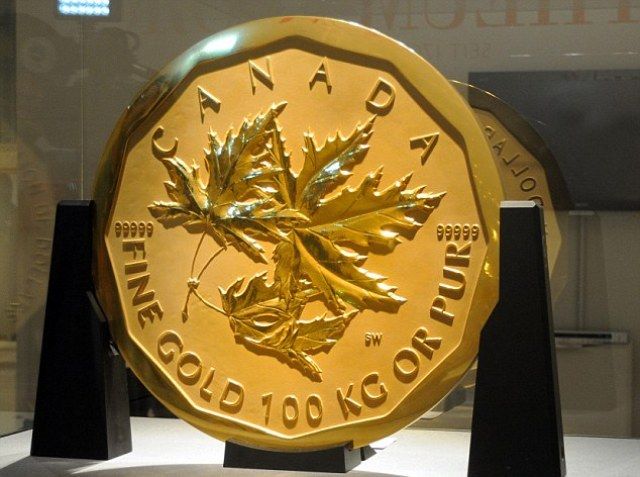 With a face value of $1-million and a true market value of at least $5-million according to current gold prices, this giant coin is the king of Canadian gold coinage.

Originally the Royal Canadian Mint made just one to promote its new line of .99999 pure Maple Leaf bullion coins. When buyers with exceptionally deep pockets showed a great interest in getting one, more were minted. Today a total of five are scattered around the world, and one is in a vault in Ottawa.

A million-dollar coin was stolen from a German museum in 2017. Thieves used a three-meter-long ladder to enter the back of the Bode, then carted it away in a wheelbarrow!

A Celebration of Her Majesty’s 90th Birthday – The first gold coin to feature 29 Canadian diamonds and a large AAA cabochon emerald at its center. Only 125 minted in 2016 with a price tag of $6,999.95.

1976 22kt $100 Olympic Commemorative Gold Coin – Two versions were released, one 14kt and the other 22kt. Naturally the 22kt version is worth significantly more.

« Canadian Gold Maple Leafs vs American Gold Eagles
Half of Canadians $200 Away from Broke, 31% Drowning in Debt »
TAGS: Canada, Coins